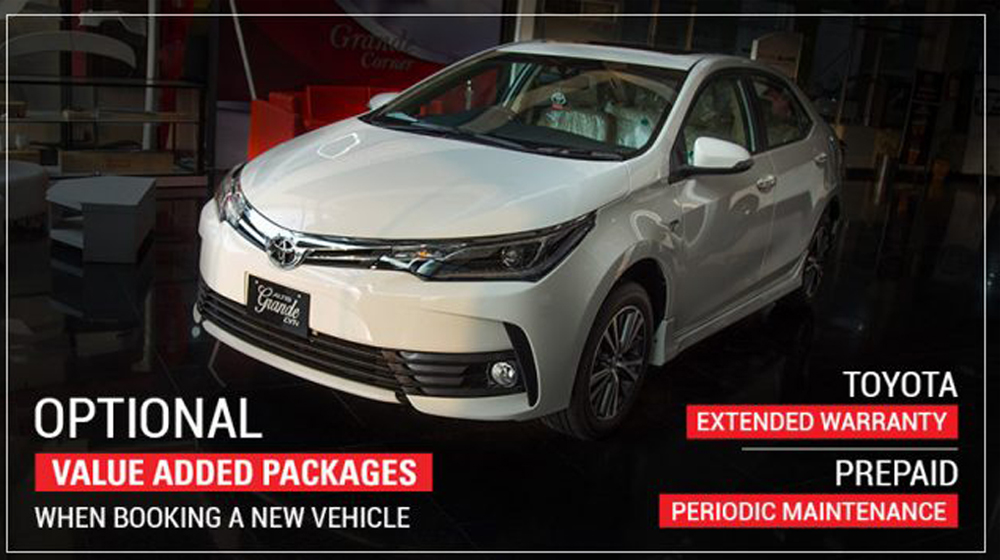 The recently launched Toyota Corolla 2017 has emerged as the new hot favorite of Pakistani consumers.

However recently, some interested buyers of the new car are facing an issue when it comes to ordering them from Toyota dealerships.

The procedure of booking a new car is a bit difficult and time-consuming. Recently, it has been reported that some dealerships have been persuading the new Corolla buyers into buying Toyota’s additional extended warranty, at times even pressurizing them into getting it come what may.

Here’s What Is Going On

Some of the buyers of the new Corolla say that the staff at Toyota Dealerships give them no option but to buy the extended warranty for an extra amount.

The staff at the dealerships insist that it is a the part of the package and the new car cannot be booked without paying an extra amount of Rs. 9500.

Even though the extended warranty package assures that the car is covered for three years or 75,000 kilometers, it isn’t compulsory when buying a new Toyota Corolla.

Angered by this attitude, many customers took an initiative and contacted not only Toyota Indus Motors but also the Competition Commission of Pakistan regarding this issue.

In response to their queries, the Toyota Indus Motors confirmed that forcibly making their customers opt for the extended warranty is not part of their official policy.

They revealed that the dealers were forcing these rules on their own.

Toyota made it clear to the customers that both the packages, extended warranty and prepaid periodic maintenance, are not compulsory and completely optional.

The issue stems from the fact that this directive has not been clearly mentioned by the company or conveyed to most of its customers directly from the beginning. Therefore, dealers take advantage of the customers’ lack of awareness and are taking such measures to bully customers to buy these additional packages.

In response, Toyota has now brought out this advertisement to ensure that customers have all the facts right:

The cost of periodic maintenance package is Rs. 38,000. While this is certainly not a small amount, the offending dealers should have apologized to the loyal customers to make up for their misgivings.