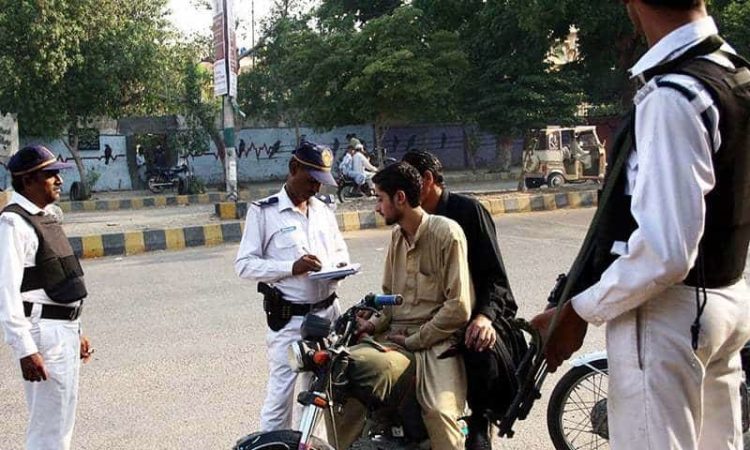 District East Judicial Magistrate Shaoib Elahi in Karachi has given an odd verdict relating to an incident where a motorcyclist injured a law enforcement officer with his bike.

The culprit was ordered to stand at a signal, holding a placard which displays a message bearing the message: “Ahtiat kijye! Ghaflat aur laparwahi se gaari chalana jan lewa hai [Be careful! Driving a car negligently and carelessly can kill]”. He was commanded to obey the instructions every Friday for two hours for one whole year; October 11, 2018.

The judge also specified height and width of the placard which the culprit would hold for a year. He mentioned that the placard should be of 24 by 48 inches. He further ordered him to pay Rs. 50,000 to the injured officer.

The main purpose of the punishment was not only to teach that rider a lesson but also to educate the locals about the risks and hazards of speeding and driving rashly.

The victim of this incident, who now has a fractured leg, was hired to guard Pervaiz Musharaff’s movement in September 2015.

Details reveal that Muhammad Qasim, the rider, crashed his bike into the Constable Zubair Ahmed, near Tipu Sultan flyover on Shahrah-e-Faisal, after he was directed to stop so that Musharraf’s convoy could pass. It was also found that during the incident, a pillion rider was also with him but he wasn’t given any punishment as he was found innocent.

During the hearing, five policemen testified against Qasim.

Without a doubt, it is an unusual punishment but does hold a positive outcome by teaching Pakistani local riders on safe driving.