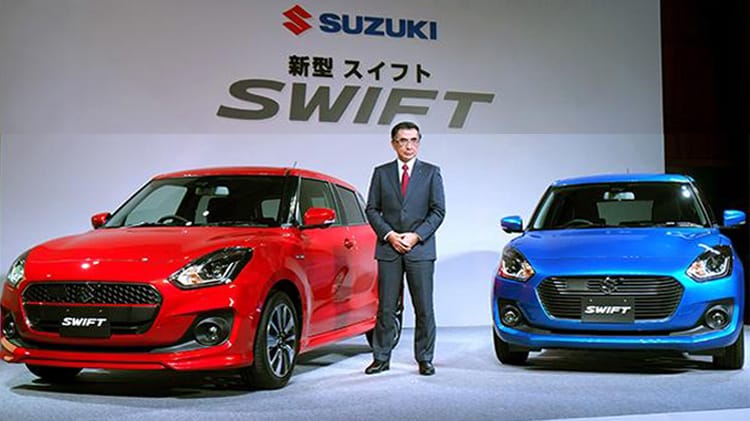 Suzuki has unveiled Suzuki Swift 2017 at Geneva Motor Show and the production of the latest model is underway at the company’s Japanese plant. Fans of the Suzuki Swift in Pakistan are hoping that the new model comes to this part of the world.

Suzuki has updated the design of third generation Swift 2017. The vehicle employs an innovative new technology that Suzuki has dubbed as HEARTECT , which makes the car lightweight and rigid. The company has also introduced SVHS mild hybrid drive and a better safety system in the latest model.

Suzuki is aiming to attract the younger generation with the updated Swift 2017 model. Let’s take a comprehensive look at its features:

Suzuki Swift has a few subtle hints which may remind you of the older (and discontinued) Suzuki Baleno. Much like the Baleno, Swift has taken a huge step in terms of styling. It boasts a new design language.

Swift 2017 retains the basic shape and the size of the outgoing model but it brings modern details and a sportier stance. The most prominent feature of the vehicle is perhaps the new headlamp design. The lights are much smaller and have an angular shape, similar to the Baleno.

The grille has been redesigned in the latest model; it now features a hexagonal shape, wider than previous models. Suzuki has also changed the design of the hood which extends across the nose to the grille, finishing a few inches above than old hoods.

Interestingly, preliminary photos of the new Swift show that some design elements vary depending on the colors. For example, while the red and blue models have vertical slats, the latter has an upper honeycomb mesh section and a red stripe. 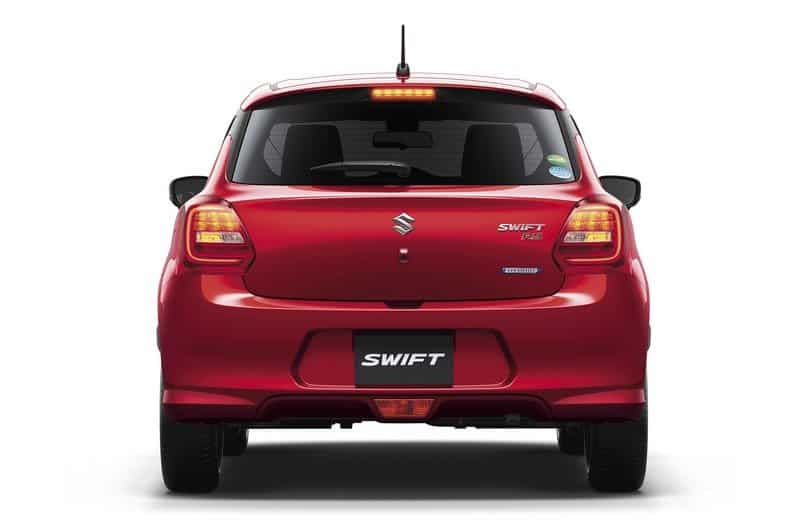 At the back of the car, Suzuki has opted to ditch the curved design in favor of an angular shape, like the Baleno. Swift has LED layout, C-shaped, around the stop, reverse and turn signal lights.

The bumper is also redesigned to give it a more sportier look, improving the overall feel of the car.

Viewing the Swift from the side, the changes are noticeable even though the overall shape and proportions of the car are same. It has a lower roofline and a more padded belt-line over the wheel arches.

“We have achieved a completely new super light weight body that weighs only 840 kg, which is 120 kg lighter than the current model.”

The company itself did not speak much about the interiors. However, the pictures revealed to the public gives us a good glimpse of what to expect inside the Swift 2017. The dashboard has been completely redesigned apart from the V-shaped layout, which remains the same.

The aircondition vents now compliment the dashboard supremely. Keeping everything aside, the most prominent change is the inclusion of 7-inch touch screen panel, which replaces the radio unit and knobs. Modern graphics and buttons have also been embedded in the HVAC area, residing above the console center. 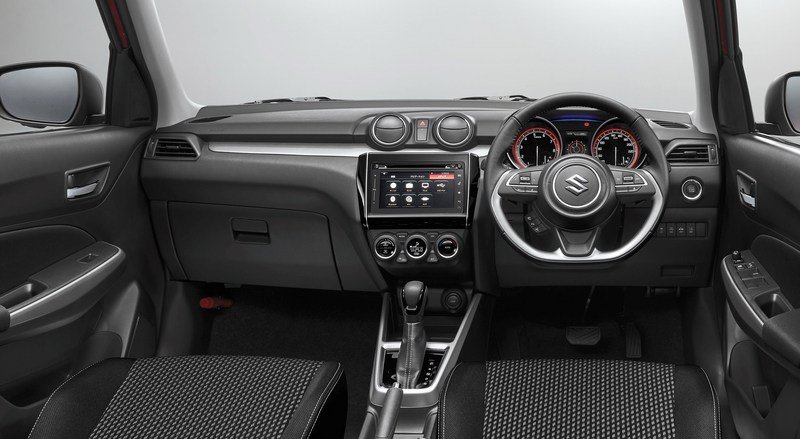 The company is yet to update regarding which apps and features come with the 7-inch touchscreen but it is expected that it will not be disappointing.

Instrument centers has been improved massively as well; speedometer and rev counter both have separate covers and a digital display is present in the middle. 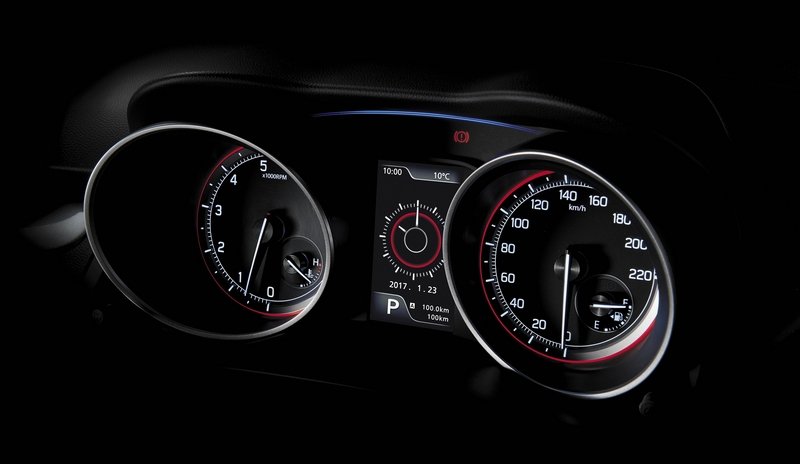 Steering wheel looks much appealing with chrome detailing. It also possess controls on both sides of it and has a firm and sporty grip.

Additional features such as Safety Package (which includes DSBS), collision mitigating system with laser sensor and high beam assistance along with adaptive cruise control are all optional. 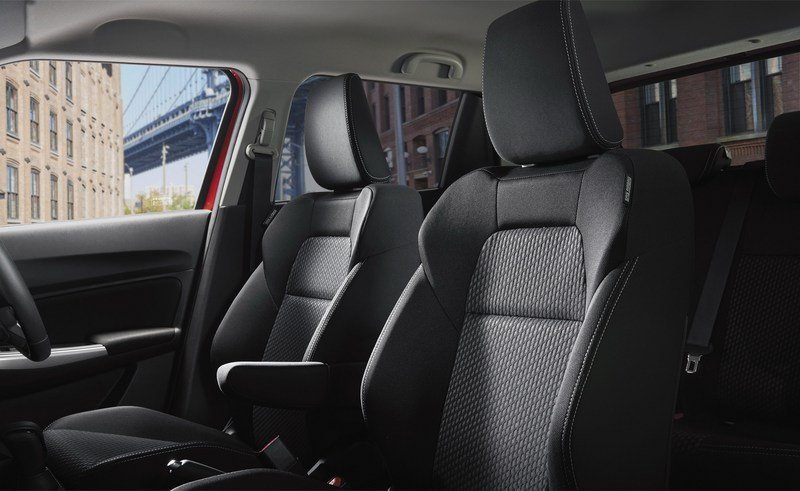 Speaking about the seats of the new Swift, their shape is redesigned, optimized and offer additional comfort. On top of these changes, it offers more leg room as well. It may all be speculation but it is expected that the luggage room will also increase given the design of the car. However, no specifications regarding that has been released by Suzuki.

The available outgoing model of Swift comes with two gasoline engines and it won’t change in the new generation. The petrol-only engine line-up includes a 110bhp BoosterJet 1.0-litre 3cyl turbo, and an 89bhp 1.2-litre four. A mild hybrid system is available with the 1.0-litre engine too, which lowers emissions to 97g/km.

For the Japanese market there is a new 5-speed manual plus a CVT along with a 6-speed AT. 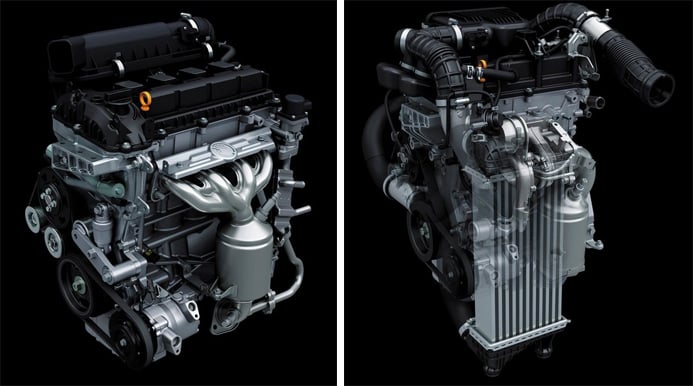 According to the company, “the mild hybrid SHVS system based on the same powerplant will be offered too.”

There is no official announcement as to whether the company will still look to use the 1.6-litre 4-cylinder, even if it did, it won’t come as a huge surprise. Speaking about the transmission, there is a standard five-speed for the 1.2-liter, an optional CVT, and a new six-speed automatic for the 1.0-liter turbo.

There is no official word but the price should stay close to the current car’s £8,999 starting figure. The new Swift will go on sale in June 2017 though there’s no word yet on its availability in Pakistan. We can however expect Pak Suzuki Motors to bring it here in the near future.