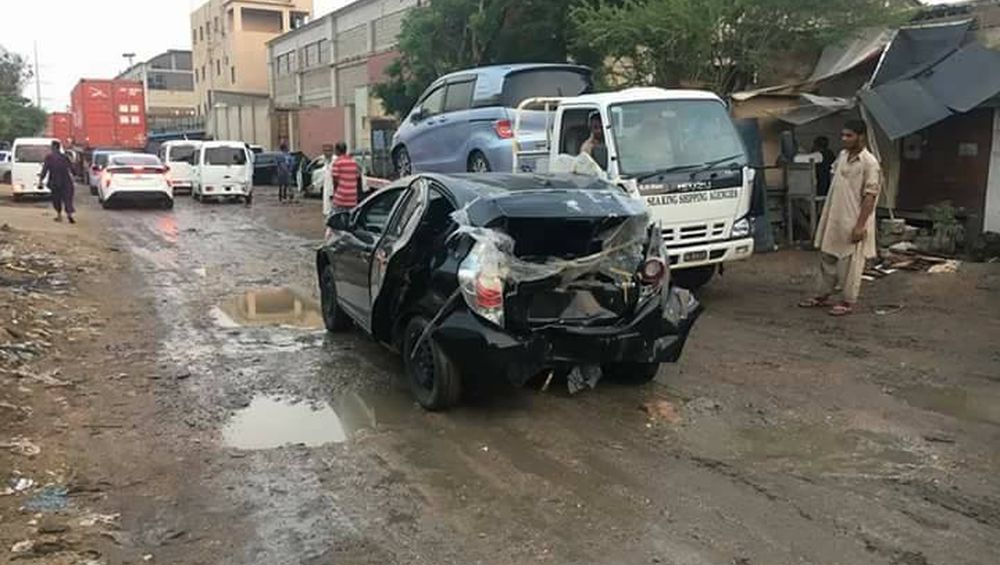 The taboo regarding the reputation of Japanese cars is finally breaking. More and more locals are finally realizing that Japanese cars offer far better quality when compared with locally assembled vehicles. Due to this reason alone, the import of Japanese car in Pakistani market is on the rise.

However, it has been reported that various showrooms are severely taking advantage of this upward trend by misleading thousands of customers.

Pakistani showrooms and other dealers have always claimed that they have been importing Grade-4 and Grade-5 vehicles — which means that the imported cars are in almost new condition, while that is not the case!

On Tuesday, a social media post made an extraordinary claim that Japanese cars are being imported in appalling conditions, being repaired and then being sold as Grade-4 and Grade-5 cars.

The Facebook post went viral as it contained a number of images of totalled accidental vehicles. Here are the images which are breaking the internet:

Apparently, the purpose of this scam is to simply rip off people. Accidental cars are purchased from Japan at cheap price and then sold in Karachi and other parts of the country. Some are being sold at the Khalid Bin Waleed road.

Since this process ensures huge profit margins for anyone who runs such business, these people are shamelessly lying through their teeth for their personal gain.

This should act as a warning sign for everyone who is hoping to buy a Japanese car. To avoid being a victim of a fraudulent sale, it is important to take certain precautionary measures such as: taking a mechanic who can check the car for any damage, checking Japanese car portal for Auction Report of the car and so on.

There’s Truth in the Story

Although people might discard this as another attempt to spread propaganda but there’s definitely truth in it, especially because there have been several similar reported incidents.

In the past, ProPakistani has received a complaints which have highlighted the same scam.

Keeping the name of the source anonymous, here is what one of our readers had to say:

…I bought a Honda Fit Shuttle (2012) from Rawalpindi, which had been imported from Japan. Since my father was unavailable to accompany me when I purchased the car, I took my friend along with me. We did check the car but did not pay enough focus on the rear of the car. After paying Rs. 1.64 million I took the car back home. A few days later my father noticed misalignment in the rear sections of the car. Upon closer inspection, we found out that the whole rear section had been dented and repainted.

Once identified, government needs to take strict action against people responsible for this scam as they are openly playing with the trust of the customers and stealing their hard earned money. Pakistani consumers are already being looted by the monopoly of three car makers and now import dealers have started scamming buyers, leaving them no other options.