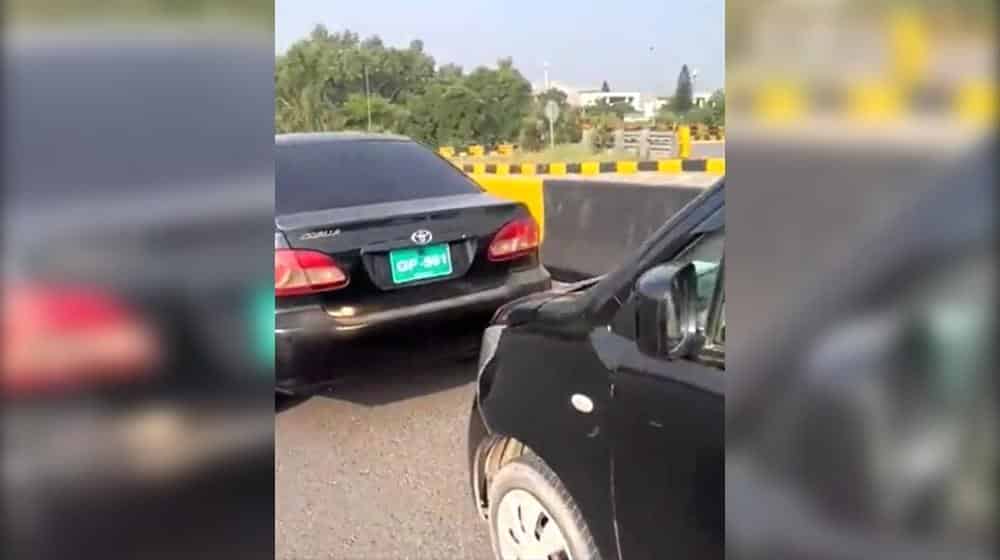 A road rage incident caught on video involving a family man and a government official is going viral on social media.

The video shows a black Toyota Corolla with tinted windows and a green number plate, blocking the path of a black Suzuki Wagon R with a private number plate. The driver of the latter car recorded the government official who can be seen shoving and threatening him.

The driver of the black Wagon R was accompanied by an adolescent child who also got caught in the verbal crossfire.

The Wagon R driver alleged that the Corolla was joining the lane from the wrong side, which of course, did not make it into the video. However, the government official’s reckless behavior has been seen and criticized by millions of social media users.

Interestingly, Corolla’s number plate reads ‘GP-561’ while the text below the registration number reads ‘Sindh’. It bears mentioning that GP series numbers belong to the federal government, while Sindh only has ‘GS’ series numbers.

We checked this registration number in the federal and Sindh excise databases. The federal database requires the date of registration which made the verification a challenge.

Although, oddly, the Sindh database did not show any details against the number, which implies that the number is probably fake.

This is a developing story as we await more details regarding the incident. Stay tuned!