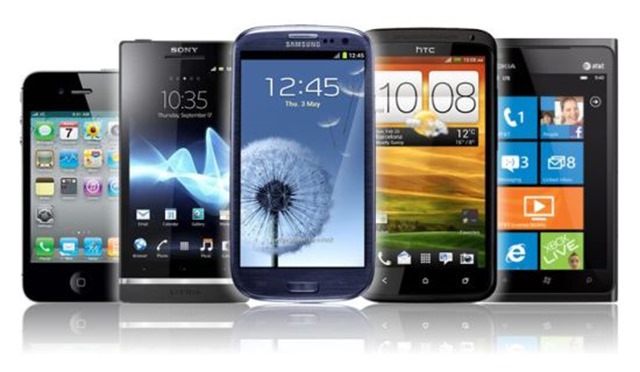 The year 2013 may have brought quite a lot of new things to the table in the case of smartphones, but as a whole it has been evolutionary rather than revolutionary.

Sure, technologies like 4K video recording, curved displays and 2K resolution displays are quite an achievement for which manufacturers should be proud but even they are overhauls and steps build upon from previous years.

But before we head forwards, first, the all-important timeline:

The year was kicked off in spectacular fashion by the grand arrival of BlackBerry’s new BB10 OS-running phones, which brought along some of the biggest changes the company’s OS has ever seen.

The new lineup consisting of the BlackBerry Z10 (all-touchscreen phone) and Q10 (for traditional customers) brings the best of both worlds on paper but people weren’t much interested, mainly due to the lack of apps and unintuitive interface.

Huawei also brought along its first Windows Phone, the Ascend Mate W1 and a budget phablet in the Ascend Mate, which is still an attractive deal. Finally, Sony pulled the covers from its next flagship, the Xperia Z. The phone comes with a great design, great internals and a Full HD screen to make an attractive package.

February saw HTC announcing its next flagship. The phone comes with a 4.7” Full HD display, a first-in-class UltraPixel camera and lastly (but far from least) an aluminum unibody. That last reason alone is a valid point to get this phone. Nokia also announced two Windows Phones, the Lumia 720 and 520. The latter is the cheapest smartphone running on Microsoft’s OS and would later grow on to become the most-popular Windows Phone of all time.

The very next month, Samsung announced its flagship, the Galaxy S4. It features the same design as its predecessor, but a vivid 1080p display and a 13 megapixel shooter. Sony announced two new and exciting Android devices called the Xperia L and SP, which remain a respectable offering at this price point from any major manufacturer.

April saw the announcement of the first ever Facebook phone, the HTC First. The phone comes pre-installed with the social network’s skin on top of Android, the Facebook Home but just like HTC’s previous phones with dedicated Facebook keys, the First met with lukewarm reception. Samsung announced its largest ever Android smartphones in the Galaxy Mega 5.8 and 6.3 in its quest of covering the bases. And then some more.

BlackBerry announced its cheapest BB10 device in the next month, which was still way too expensive. The strategy failed and the Q5 was pretty much lost.

Samsung announced the Mini-version of its flagship, the Galaxy S4 Mini too rather limited fanfare. Still, the “Mini” is in a different price and spec bracket than the flagship altogether. Nokia announced its next flagship, the Lumia 925 which is almost completely the same, bar the phenomenal metallic design.

Nokia’s Meego OS team also came up with their independent project, the Jolla. The phone’s future depends a lot on the blend of its software and hardware capabilities. Sony announced the “unofficial” mini version of its flagship with the Xperia ZR which is better than Samsung’s and HTC’s subsequent effort.

June saw Huawei announcing its next flagship and the then thinnest smartphone in the world, the Ascend P6. Sony also announced its ultra-large phone, the Xperia Z Ultra. The phone’s supersensitive display and waterproof design place it among the all-time greats.

Samsung also came up with two new versions of its flagship; the S4 Active aimed towards those who live on the edge, and S4 Zoom, for heavy-shooters. HTC produces a phone which is even better than its flagship, but maintains that the One is here to stay and that too, at the top. Samsung announced one of its more decent offerings in the starter range, the Galaxy Core.

Nokia finally added the PureView camera in its original shape on a Windows Phone next month, in the Lumia 1020. The rest of the specs remained the same as Lumia 920/925. They also announced the 625, which is a cheap Windows Phone but with a large 4.7” display. HTC also jumped on-board the ship by announcing a mini version of its flagship, through the One Mini. The effort was much appreciated but there wasn’t much “Mini” regarding its price tag.

LG announced its flagship, the G2 in August. Its bezel-less design, placement of volume keys and strong internals make it one of the best offerings out there. Motorola also announced its first phone after being brought out by Google, the Moto X. The phone’s dazzling accessory list is the highlight but its organic interface and always-on voice recognition make it an awesome package, even if the subpar specs hold it back a bit. Acer’s not a huge name in the smartphone world but they must’ve shocked the world when they announced the first-ever phone with 4K video recording & ring-flash, coupled with a 6” Full HD display and beefy hardware. HTC also announced a respectable offering in the mid-range category, the Desire 500.

September is important mainly due to Apple’s awaited contributions and this time, it gave two of them. The iPhone 5s and 5c lie in the upper-end and lower upper-end category. The former comes with a finger-print scanner, 64-bit processor and a 7.6mm thin body making it a respectable package while the latter comes in attractive colors.

Samsung also announced the world’s most popular phablet in this quarter, the Note 3, which comes with a larger display, a better S-Pen and 4K video. Its accessory, the Gear, is also amongst the more popular smartwatches lately.

Meanwhile Sony too announced a new cameraphone but without a hump, the Xperia Z1. The phone comes with a 20 mp camera and additional lens accessories which make it more of a point-and-shoot. Lastly, BlackBerry announced a new phone called the Z30 which is basically an enlarged Z10 at heart, failing to capture attention once again.

October was all about the curved phones from LG and Samsung. Samsung came first and announced the Galaxy Round which is curved outward and packs a punch inside.

The LG GFlex, however, is the first true curved (and flexible) phone with a 6” OLED display but only 720p resolution. Also announced in October was Google’s next offering (and this author’s phone of the year, all things considered), the Nexus 5. The real treat here is that it not only gives you the best specs and OS version in town, but also at a price which you can swallow. HTC came up with a new version of its One flagship, the One Max which is a larger version of the One, and with a fingerprint scanner.

November saw Google nailing it on the head once again, with the Moto G which also offers respectable specs at a price anyone can pay. Nokia announced its next flagship, the Lumia 1520, which came with the largest display for a Windows Phone (6”) and SnapDragon 800, along with a cheaper but still respectable Lumia 1320. Samsung also announced the next iteration of its mid-range phenomena, the Galaxy Grand 2.

Finally, we ended the year with the implementation of a major innovation in smartphones, 2K displays, which found a place in the Vivo Xplay 3S. We really hope to see it with our eyes soon and there’s no reason to think why the next flagships of Samsung/HTC/LG won’t come with it.

Overall, what we saw during all this year was further increase in screen sizes and resolution, better and more capable hardware namely the NVidia Tegra 4 and Qualcomm SnapDragon 800 processors.

Cameras saw a massive improvement. Nokia and Sony gained most ground in this aspect but those in other manufacturer’s devices improved too.

The year also saw a new trend of changes visually. Skeuomorphic elements found their way out, replaced by translucent and parallax effects. The prime example of this was iOS 7 while Android also adopted a few things here and there in KitKat.

Fingerprint scanners are almost certainly seeing a revival with the help of Apple through its TouchID. Whether they’ll get mass-adoption is yet to be seen but Samsung’s next flagship may be on its way to getting a scanner.

Curved displays are interesting but we honestly don’t see any manufacturer incorporating them in its flagships presently. They do offer quite a few benefits and make a phone less vulnerable to cracking but unfortunately, now is not the time for their mass-approval.

Contrary to what many had anticipated, styli remained a niche item. Apart from Samsung almost no other companies are investing into it, despite styli being one of the primary reasons why the Galaxy Note is such a hit.

But perhaps nothing has quite seen a departure in the same way 3D shooting and displays have. While they first arrived in 2011, they have disappeared into nowhere since that time and 2013 didn’t saw any of those either.

It’s no secret that better displays are about to make their way into smartphones in the near future. HTC will announce its flagships in February while Samsung around March and we certainly can’t wait. Not only that, but display sizes will also be increasing in the future.

True octa-core processers will be getting more common in our devices. Camera modules will improve too, and will get only smaller. Qualcomm’s newly announced SnapDragon 805 processor should be found in a lot of these new devices but the old 800 won’t be out anytime soon either.

As a part of the Microsoft deal, once the most-iconic smartphone-maker in the world, Nokia won’t be able to use its name on smartphones anymore. The American company has also earned the rights to the Lumia and Asha brand-names.

Nokia will, in fact, be able to use its name on feature-phones after 2015 but between that time and today, No. It’ll be rather interesting to see though how Microsoft will sell phones in Europe and South Asia where the company is much-loved and still enjoys great success.

BlackBerry isn’t in any good state either. After its buyout plan failed, it got $1 billion dollars to set itself back but since then, we aren’t seeing any smartphones from the group at all. It has already stated that it will focus mainly on services and corporate sector now. Bad times are far from over though but still there is some hoping.

As a whole, the year of 2013 brought a lot of evolutionary stuff, rather than revolutionary; which is fine. We saw even larger screens, even more powerful internals and better cameras. We also saw a company — we all know and love — die and we also saw the first ever 64-bit processor making an appearance in a mobile phone.

Based on our judgements from this year, 2014 will probably be evolutionary too. Maybe Apple will increase the screen size of the iPhone, that’ll be quite a surprise.